It was a sight to behold as the deities appeared in golden get-up aboard their chariots in front of the shrine. The deities were adorned with gold jewelleries weighing nearly 208 kg.

The servitors performed Mangala Alati of the deities at 6 am followed by other rituals like the Abakasa Niti, Gopala Ballav and Sakala Dhupa. 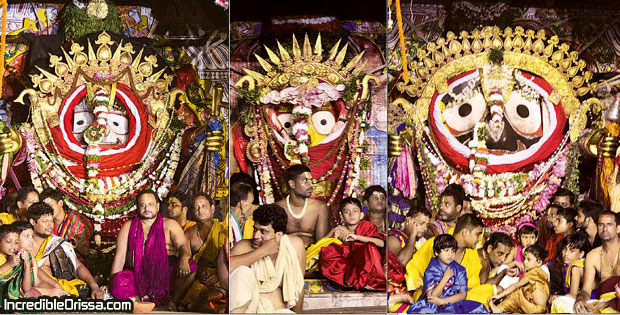 The Mahasnana of the deities began at 1 pm after which Madhyanna Dhupa and Sandhya Alati rituals were performed.

The Daitapati servitors began the Rajarajeswari Vesha (Suna Besha) of the deities at 5 pm and completed it at 6.15 pm. The Suna Besa of the deities continued till 11.30 pm.

The Chandana Lagi ritual was performed after 11.30 pm after which Badasinghara Vesha of the deities were held at 12 am followed by Ballabha Badasinghara Besha at 3 am.

The Adharapana Lagi of the deities would be held today while the deities will return to the main temple tomorrow.