Suna Besha of Lord Jagannath will be observed in Puri on 21st July 2021 (Wednesday).

The deities (Jagannath, Balabhadra and Subhadra) will be decorated with various gold ornaments during Suna Besha. The total weight of the ornaments are more than one quintal.

The Suna Besha or Rajadhiraja Bhesha or Raja Besa happens on the day after the return of the Lords from Gundicha. On the day of Bada Ekadasi, the 11th day of the bright fortnight in Asadha, the deities, on their chariots itself done the golden attire or the Suna Besha, with hands, arms and crown made of solid gold.

Suna Besha observed 5 times during a year. Generally the Besha happens on Bijaya Dashami (in October), Kartika Purnima (November), Pausa Purnima (December), Magha Purnima (January) and Asadha Ekadashi (July). The last Besha is observed on the chariot in front of Jagannath Temple, other four Beshas are observed in temple on Ratna Singhasana.

During the reign of Ananga Bhima Deva, the king of Utkal, Lord Jagannath was declared as ‘Utkal Samrat’ or “Lord of the Nation” in the 13th century, and by then the Jagannath Temple at Puri had been built by him in 1198. According to temple history, Suna Besha was introduced during the era of King Kapilendradeva in 1460 A.D.

The East Coast Railway (ECoR) will run special trains to Puri on the occasion of Suna Besha to avoid rush in regular trains. At least 26 special trains for Suna Besha will be run to Puri. ECoR has also arranged most of the special trains with reserved accommodation unlike previous years. 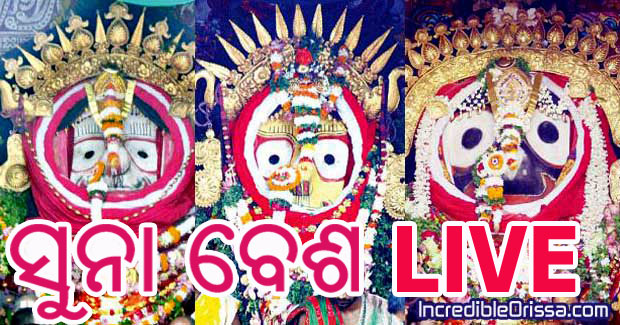