Devotees will get to see Suna Besha of Lord Jagannath, Lord Balabhadra and Devi Subhadra on the auspicious occasion of Pausha Purnima at Puri Srimandira in Odisha today.

Lakhs of devotees thronged Srimandira to have darshan of Lords in golden attire inside the sanctum sanctorum of the temple. The Lords will appear in Suna Behsa following the morning rituals and a special ritual known as ‘Pushyabhisek’ on the holy full moon day.

In view of the influx of crowd on the special occasion, the temple administration has made tight security arrangements on premises of the shrine for smooth conduct of the Suna Besha darshan. The barricade has been made from the Grand Road in the pilgrim town. The devotees will enter into the temple through the Singhadwar and will exit through the south gate.

While one such Suna Bhesha event is observed on Bahuda Ekadashi during the Rath Yatra on the chariots placed at the lion’s gate (also called Singhadwar; the other four Beshas’ are observed inside the temple on the Ratna Singhasana (gem studded altar).

Suna Besha has been observed since 1232. During the reign of Ananga Bhima Dev, the king of Utkal, Lord Jagannath declared as state God. Suna Besha is also known as Raja or Rajadhiraja besha or Raja Besha or Raj Rajeshwar Besha. 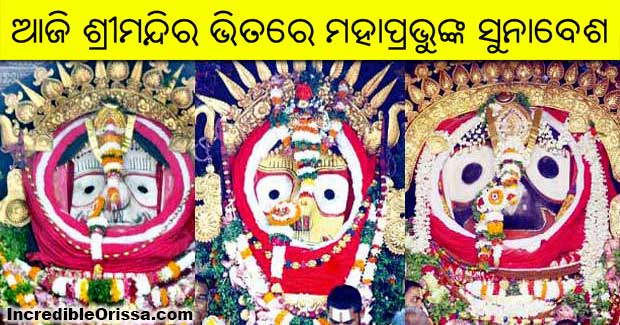