The nominations for the two-phase elections in Odisha closed. But that has not deterred cine stars from Ollywood jumping on the the political bandwagon.

After joining the party, Sunil said he is inspired by the ideology of the party and the vibrant leadership of its prime ministerial candidate Narendra Modi.

The cine star said he was keen to campaign for the party in the state. 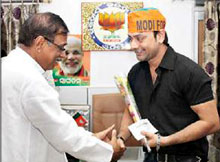 Welcoming Sunil into the BJP, former Rajya Sabha member Surendra Lath said the party would be strengthened after the induction of the film star.