Swayams Mishra becomes India’s 62nd and Odisha’s second Chess Grandmaster after achieving his third and final GM norm at the Polonia Wroclaw Master Cup, which was held at Poland’s Wroclaw between 28th April and 5th May 2019.

Congratulate chess prodigy Swayam Mishra on becoming the second Grand Master from #Odisha and 62nd from India after receiving his third and final norm by finishing first at Polonia Wroclaw Master Cup in Poland. Wish him my best for the future.

Grandmaster (GM) is a title awarded to chess players by the world chess organization FIDE. Apart from World Champion, Grandmaster is the highest title a chess player can attain. Once achieved, the title is generally held for life, though exceptionally it may be revoked for cheating.

This was this third Grandmaster norm that Swayams needed to qualify for the coveted title. He scored seven points in the entire nine-round tournament to reach the top of the table.

Swayams has been playing chess for over 19 years and is also a reputed FIDE trainer. He has also been coaching upcoming chess players for the past 8 years, who have won many major tournaments and awards.

In 2014, he had bagged his first Grandmaster norm in the KIIT Open held in Odisha capital. 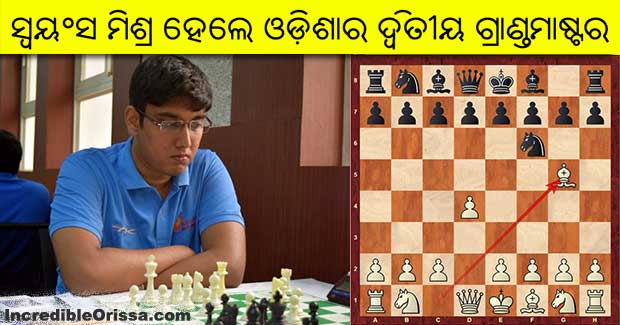