A middle-aged man from Bhubaneswar tested positive for Swine Flu, Odisha’s first H1N1 case in 2015, on Saturday amid a spate of deaths from the viral disease in Delhi and the National Capital Region (NCR) over the past few weeks.

The Odisha government has sounded an alert across the state.

Director, public health (DPH) Kailash Das said the 65-year old man from Balipatna, who was admitted to a private hospital in the city, is in a stable condition. “He has a recent travel history to Delhi and Lucknow. After testing positive for influenza-A, he was kept in an isolation ward,” Das said.

Since the man was admitted to the general ward of the hospital with respiratory distress on January 6, before the diagnosis, other patients there too have been kept under watch, Das said.

The DPH said all the medical colleges and chief district medical officers in the state had been alerted to be vigilant towards cases of flu and step up surveillance. “People don’t have any reason to panic as isolated cases may come up. They should not, however, neglect flu symptoms and consult a doctor immediately,” he said.

Das aid personal hygiene such as washing hands before meals was an important part of the prevention strategy.

At least 32 persons were killed from the disease in Odisha in 2010. Delhi and NCR reported four swine flu deaths over the past few weeks. 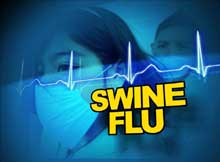