In a serious gaffe, a Tamil movie dubbed in Hindi has portrayed Odisha Director General of Police (DGP) K.B Singh as a martyr. Even as Singh took the matter in a lighter vein, a fuming Odisha Police Association (OPA) demanded an apology from the film’s producer and director.

In the scene, the lead character ACP Shiva played by Tamil actor Sathyaraj, who enacted the popular character of Kattappa in the blockbuster Baahubali, is seen standing in front of a wall with pictures of several police officers, who laid down their lives for the country, and the photograph of Singh also features.

While delivering a dialogue, Sathyaraj pointed his finger to each and every cop in the photographs, appreciating their contributions to the society. Sathyaraj, who plays the role of a police commissioner, is trying to instill a sense of commitment and honesty in lead actor Raghaba Lawrence, a corrupt assistant commissioner of police.

“I was shocked initially and then laughed. What can I do? Perhaps the film’s crew members were searching for police martyrs on the internet. By mistake they might have downloaded my photo. If possible, I will draw the attention of the film’s director and producer,” Singh said.

“I would like to give my life for the country but I am still alive. They should not have done this,” reacted DGP Singh. He said perhaps, the film’s crew members have downloaded his photograph from internet while searching for martyr police officers. 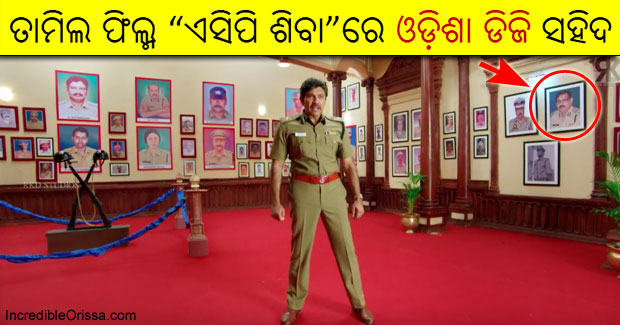