Threat to world famous Konark Sun Temple looms large as the findings of a study conducted by the Roorkee-based Central Building Research Institute (CBRI) have cast apprehensions over the stability of the structure.

The CBRI had conducted an endoscopic photography of the historic monument to ascertain the condition of the world heritage site’s interiors and also to ensure its proper conservation and safety.

The 3-D laser scanning revealed that stones have dislodged from inside and found fallen on the ground. Besides, the iron beam erected to support the structure from inside has also caved in.

As per findings of the study, the sand filled inside the Jagamohan of the 800-year-old structure has slumped almost four feet than its prior level. Besides, a gap of 62 foot has also developed in the Jagmohan.

Members of Konark Working Group, a body fighting for the protection of the sun temple, have raised concerns over the safety of the Black Pagoda.

“It is experimentally proved that the sand inside the Jagamohana has slumped, besides the beams and some stone blocks are in suspended state. If an earthquake of 6 or 6.5 magnitude on Richter scale occurs in the area it may cause damage to the structure,” Konark Working Group member, NC Pal said.

“It is certainly a matter of concern. We hope that the Archaeological Survey of India (ASI) should take adequate steps for conservation of the historical monument. We will draw attention of the Centre in this regard,” Odisha Culture minister Ashok Panda said. 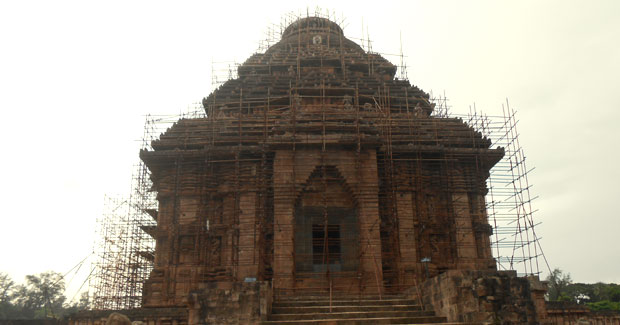