Odisha government’s fisheries department in technical collaboration with WorldFish organization has started a programme to promote Tilapia fish farming in the state.

The farmers in various parts of the State are raking in lakhs of rupees through fishery which is helping the State Government to speedily achieve the target of doubling the farmers’ income.

In fisheries and aquaculture sector, the Department of Fisheries and ARD in collaboration with the WorldFish, Malaysia has introduced a fast growing and hardy variety of fish species named GIFT tilapia (genetically improved farmed tilapia) under fish crop diversification strategy and thus boosting the fish production, exports and farmer income in the State.

The tilapia is a major internationally traded seafood commodity with high demands in USA, EU, Middle East and African countries. It is produced and consumed in more than 100 countries. However, Tilapia is under introductory phase in India.

“The farmers were provided fishlings weighing 0.14 gram each for farming and in five months duration each fish has grown to 850 grams. Both the farmers have earned bumper profits,” said Trilochan Swain, an official of WorldFish.

An acre of pond yields around 3000 kilograms of Tilapia variety. “The total cost of production for farming Tilapia in an acre of pond comes to Rs 1.80 lakh while the farmed fish is sold for Rs 3 lakh. The farmer make a profit of Rs 1.20 lakh per acre. Besides, as the fishes mature in four to five months, farmers can harvest at least two crops per year,” said project manager Arun Padiyar.

The profits earned from Tilapia fish farming is significantly higher than earnings from present varieties of farmed fish. The fish variety has turned a hit among customers also as it nutritious, juicy with a single bone.

To quickly increase the tilapia production in the State, construction of a state of art GIFT hatchery and multiplication center at Government fish seed farm, Kausalyaganga, Bhubaneswar, is under progress with the RKVY and State plan funding and with the technical support from WorldFish, ICAR-CIFA and MPEDA-RGCA.

This hatchery will have an annual seed production capacity of 5 million fry and is sufficient to stock 1,000 acres of fish farm and produce 2,500 metric tons of GIFT per year. Also, the multiplication center will be able to supply the pedigreed GIFT brood stock to the fish hatcheries across the State to further boost the seed production. 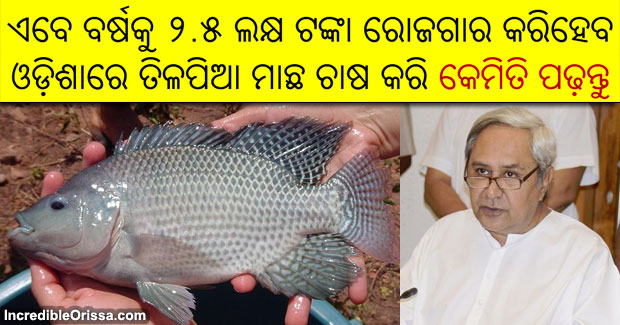