The movie is currently being shot both in Bengali & Odia language and also has actors from the Bengali film industry. The Bengali vesion of the flick is titled ‘Tor Buker Majhe Ami’.

In the film, the actor is playing a specially-abled person who goes through a massive transformation to fight for justice. “This is a challenging role and I am really kicked about this,” said Abhishek.

Actress Anubha Sourya, who was last seen in the movie Mu Premi Mu Pagala, is playing the female lead while eminent actors like Uttam Mohanty, Debu Bose, Asit Pati and George Tiadi will be seen as supporting actors. 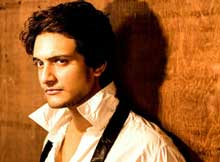 Artists like Anshuman and Santana Bose from the Bengal film industry are also there in the movie.