“Though the title sound like a love story, the movie will be a complete family drama and will showcase all aspects of friendship. Action and romance are part of almost every cinema; so, I thought of making one on friendship and I strongly believe the audience will love to watch it” Mohanty said.

The movie, which is scheduled to hit the floors on September 15, will see debutant Dev and actress Deepika in lead riles and will be shot in and aroud Cuttack and Bhubaneswar.

Tor Mor Prem Kahani is the story of three close friends who get separated after college and reunite after 30 years. The meeting is arranged by the children of two of them, who fall in love and then discover the parents’ past friendship.

Actress Deepika, who played a lead character in the recently released 2014 fear of the Year and a supporting role in Golapi Golapi, is looking forward to the project. 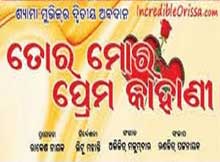 “I am playing a fun-loving girl who sacrifices her love in a bid to take care of her elder sister’s child. There are many twists and turns in the story and I am happy that I got this opportunity to play the lead in this flick,” she said.