The Indian Railways has started to issue unreserved train tickets in Odia language apart from Hindi and English from yesterday.

Railways has prepared all station names of Indian Railways in Odia script which is implemented in 317 Stations in Odisha for the stations under East Coast Railway, South Eastern Railway and South East Central Railway jurisdictions.

So, many people from Odisha who had problem with reading English and Hindi languages on train tickets and who did not know if they had the right tickets vis-a-vis their intended originating and destination stations as well as class of travel and train type are correct or not, can now read the same in Odia script.

In Digital India, Railways is the largest service provider in the country and strives to promote vernacular language – the language of the people.

The train tickets having Odia script would be applicable for unreserved tickets bought manually from the railway counters in Odisha State. 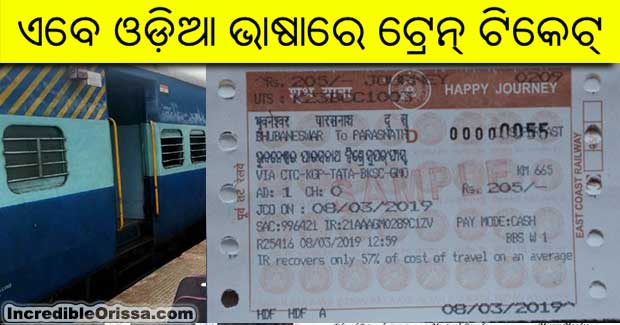