The Indian Railways decided to install 100-ft tall tricolour at Bhubaneswar and Puri railway station with another 73 stations across the country.

The flag installation will be completed by end of December. The tall tricolour will be installed at Bhubaneswar and Puri — two major railway stations — under East Coast Railway zone in Odisha.

According to reports, the Indian Railways has written to all its zonal offices asking to install 100-ft tall national flag at all the erstwhile ‘A1’ class railway stations in the country.

The order issued by the Indian Railways stated that the flag should be installed in such a position so that it will be clearly visible to the places near the station. The flag should be provided with focused lights.

The Railway Board will provide the monumental flag to the zonal offices for installation. The Railway Protection Force (RPF) has been given the responsibility for security and safety of the flag at the respective railway stations. 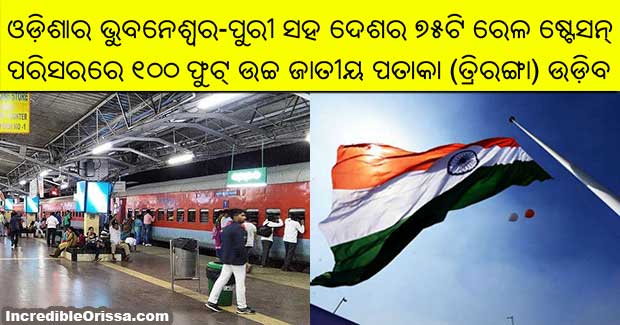