At least 2 women have been killed and many others injured in a stampede at the venue of the Nabakalebar Rath Yatra festival in Puri, Odisha, reports said.

As per sources, stampede occurred at Marichikote Square and near Hindi Vidyapeeth on Grand Road during the pulling of Lord Balabhadra’s Taladhwaja Rath where two women were killed and over 20 persons were injured. The identity of the deceased is yet to be ascertained.

Around 60 people fainted during the rath yatra due to heat and exhaustion and have been shifted to various hospitals in Puri.

“I have received information about the mishap. We are investigating the matter,” Odisha DGP Sanjiv Marik said.

Refuting the allegations of stampede, DGP Marik said, one of the deceased women died due to falling of the roof of a building and the other woman died due to exertion.

There are reports of some pilgrims sustaining injuries after falling from atop a building. They are undergoing treatment at the hospital with minor injuries, he informed.

Lakhs of pilgrims from across the country and abroad have gathered in the pilgrim town of Puri to witness commencement of the nine-day journey of the new idols of Lord Jagannath, Lord Balabhadra and Devi Subhadra to Gundicha Temple. 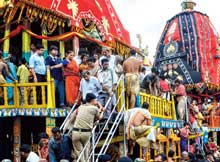 With over 30 lakh pilgrims expected to attend the festivities, police have made elaborate arrangements to provide a thick security cover by deploying about 10,000 personnel besides putting air and coast surveillance in place.

Personnel of Anti-Terrotist Squad (ATS), Rapid Action Force (RAF) and sharp shooters have been deployed at vital points while the Coast Guard keeps a vigil on the sea.