Popular Odia film and opera actress Usasi Misra alleged that she was physically assaulted by three persons at Derang village in Kaniha of Odisha’s Angul district at around 3 am on Sunday night.

As per a complaint filed by the actress with Kaniha Police, she was on her way to perform in a show of Eastern Blue Opera, which has currently camped in the Derang village when the attack took place. A former village committee president identified as Indramani Sahu first verbally abused her and then went on thrashing brutally after teaming up with his two sons. Later they damaged Usasi’s car and even beaten up some members of the opera party as they tried to save the actress.

Usasi took to her Facebook account soon after the incident and posted a detailed report on the attack with photographs in which she raised questions on the safety and security of women in the state.

“We talk of general women being safe….where a media figure like me is not safe..this man manhandled, badmouthed me n tried to rip my clothes,” she said, adding, “I gave a good fight and saved myself.”

On the other hand, Kaniha Police Station IIC Sukanti Kerketa has informed that the matter is under investigation and the truth would be revealed after it gets completed. 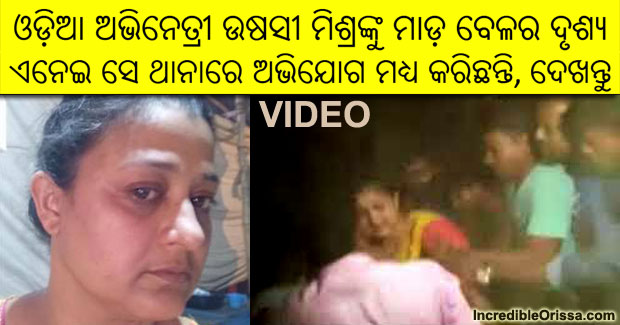