Odisha’s first newspaper ‘Utkal Dipika’ re-launched from Bhubaneswar after 80 years of shut down.

The newly launched weekly newspaper has exactly the same mast head like that of the old Utkal Dipika. The first Odia Newspaper started its publication on August 4, 1866 and continued up to 1936.

The Odia daily celebrated its 150th anniversary at Press Club of Odisha on Wednesday. The newspaper is the oldest such publication in the state.

When it was established in 1866, Gourishankar Ray and Bichitrananda were its editors. The newspaper played an important role in uniting Oriya people under one administration. It also played a crucial role in developing Oriya language and literature.

Writer Bibhuti Patnaik, who was one of the dignitaries at the celebratory event, said: “Being the first newspaper published in before Independence, the paper played a vital role in uniting Oriyas. It helped establish the identity of Oriyas and the language.”

The event also featured screening of a 20-minute documentary on ‘Utkal Dipika’. It contained clips of Gourishankar discussing the motive behind starting the paper following the great famine of Orissa and what it took to run the paper.

Bhagyalipi Malla, the superintendent of State Archives said copies of the paper had been digitised and preserved. “It will help future generations learn about the history of journalism in Odisha.” 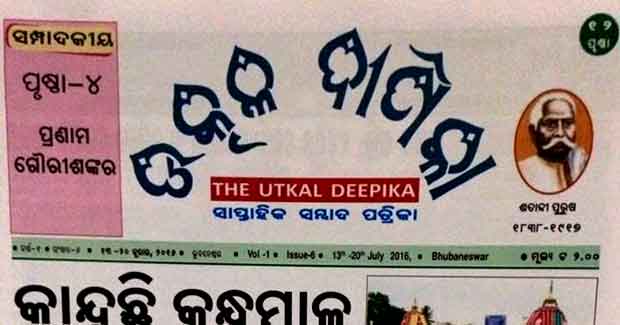