The ashes of Bharat Ratna awardee and former Prime Minister Atal Bihari Vajpayee will be immersed in major sacred rivers in Odisha.

As per the decision by BJP’s central leadership, the party leaders from Odisha will receive the urn carrying the ashes of BJP Patriarch Vajpayee from the party president Amit Shah in New Delhi.

The urn will be kept for public darshan at party’s State headquarters after the BJP leaders arrive in Bhubaneswar. The ashes will be immersed in the major rivers including Mahanadi, Baitarani, Brahmani and Rushikulya in phases.

During the period, prayer meetings will take place in district headquarters and the panchayat level, said BJP national general secretary Bhupendra Yadav. People, who have not paid their last respects to Vajpayee, will be able to have darshan of the urn at state headquarters.

According to reports, the urn carrying ashes was scheduled to be brought to Union Tribal Minister Jual Oram at his residence in New Delhi yesterday. As Shah was busy in immersion ceremony at Haridwar, the ‘asthi kalash’ could not reach the union minister’s residence. 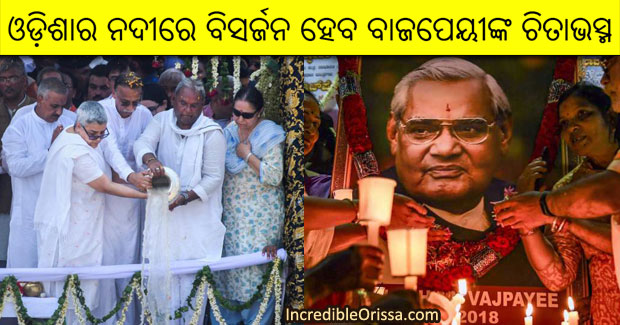