Fulfilling the long-standing demand of the Odisha government, the union cabinet today approved a proposal to rename the Jharsuguda airport as Veer Surendra Sai Airport.

Veer Surendra Sai is a well-known freedom fighter of Odisha. The renaming of the airport as ‘Veer Surendra Sai Airport, Jharsuguda’ was cleared by the Union Cabinet chaired by Prime Minister Narendra Modi.

On Tuesday, CM Naveen had written to PM Narendra Modi reiterating the demand of the State government for renaming of Jharsuguda Airport to Veer Surendra Sai Airport.

He had also requested restoration of UDAN services at the airport and exploring opportunities for flight operations from Jharsuguda to other states.

Jharsuguda airport was formally dedicated to the nation by Prime Minister Narendra Modi on September 22, 2018. Union Tribal Affairs Minister Jual Oram thanked the Prime Minister for the decision in a tweet.

Renaming of the Jharsuguda airport in his name will fulfill long-pending demand of the Odisha Government, which reflects the sentiments of the local public of the respective area. It will also be a befitting tribute to the contribution of the revered personality associated with the State. 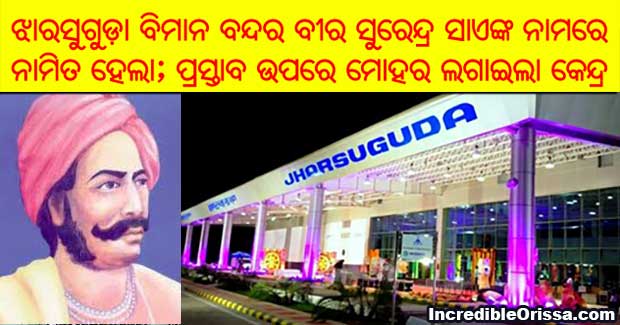