Pintu Behera from Odisha, who is a diehard fan of Indian captain Virat Kohli, met his favourite cricketer on the eve of the test match at Visakhapatnam against South Africa.

“I was speechless! A flood of emotions just gushed through my mind,” said a visibly ecstatic Pintu, describing the moment when he not only got to meet the Indian captain, but also got a hug from him.

Kohli was taken aback to see the inked body of his Odia fan, who was waiting to meet him after the press conference ahead of India’s first test match against South Africa.

Belonging to a village near Berhampur in Ganjam district of Odisha, it took Pintu Behera 15 tattoos and 30 matches to finally get the attention of his cricketing god.

On his back, the fan has got tattooed Kohli’s first name, his jersey number (18) as well as landmarks in his career including the 2008 Under-19 World Cup win, 2013 Arjuna Award and 2017 Padma Shri. 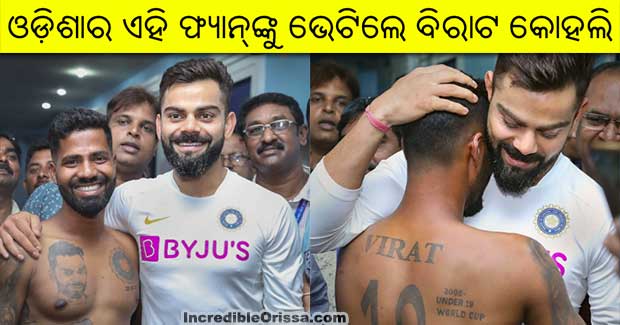