Authorities of Bhubaneswar’s Biju Patnaik International Airport have restricted the entry of visitors to the airport for a week following the terror attack at Pathankot airbase in Punjab and intelligence reports suggesting possibilities of similar strikes by terrorists in other major cities.

Airport director, Sharad Kumar said the entry of all visitors has been banned and only passengers with valid tickets would be allowed to enter the airport. He said this order would remain effective for seven days.

READ: Odisha on high alert after terror attack at Pathankot Air Force base

He also said the airport authorities have also intensified security measures. “The CISF personnel deployed in the airport are ready to face any untoward incident. Besides, we are in regular touch with the State Police,” he added. 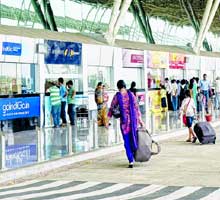