A 20-member team of the Idea and Innovation cell of Veer Surendra Sai University of Technology, Burla becomes champion of the Asia’s 1st Inter-college Rocket Competition. The two-day event was organized by the Space Development Nexus and BRICS (Brazil, Russia, India, China, South Africa) on 26th and 27th of August,2017 at New Delhi.

Out of over 50 applicants, five shortlisted teams redeemed the grand opportunity to showcase their missionary work. The grandiose event was adored by the Chief guest and the honorable judge, Dr A.M. Varaprasad, Director, CIGS, ISRO, former Scientist of DRDO.

The competition judged on the basis of developing a One kilometer apogee rocket, and various other awards categorized on other fields like Payload, best innovation, propulsion technology, Ignition System and others. The event cited its first day with the Aviation and aerospace expo and technical verification of the Sounding Rockets. The day two of the event begun with a 30 minutes presentation followed by the launching event.

The VSSUT team launched VSLV to over 3000ft and concluded with the Champions trophy and the Best Innovation Award of the Asia’s 1st Intercollege Rocket Competition. Other competitors included which included SRM University, Chennai, the Satyabhama University, IIT Guwahati, NIT Silchar and various others.

The dynamic team of 20 members was diverging across almost all trades of engineering from Chemical, Electronics, Mechanical, Civil to Computer Science.

The Team was divided into various groups such as CAD designing, Structural, Aerodynamics, Electronics, Management and Marketing. Most of the fabrication was done at Sambalpur Lathe Machine and developed in the hostel rooms, making it their own workshops, due to unavailability of workspace. Prior to the Competition at New Delhi, Regularly, experiments were conducted with a very small scale model and every error was corrected after detailed discussions. Initially after many failures, finally the VSLV 1.0 was tested on a local open field beyond Hirakud, and the dedication, perseverance and hard work of the team turned into flying colors as they successfully tested the rocket upto 2000ft height and were successful in retrieving it again by parachute for further launches.

The complete project is divided into 10 missions, with first mission being successful launch of VSLV into 1km apogee. And subsequently launching of VSLV to 2,4,8 and 10km. After implementation of successful remodeling in the future editions, the team aims to launch the final mission of 40km launch for monitoring of Hirakud Dam and Reservoir monitoring. Hence utility of the rocket is diverse and multifaceted. It can be put to use for different purposes in different missions.

This journey could have had never been possible without the constant support of the Professors, Alumni and students of the university who were always there to watch out for the success of the team. Professor Debadutta Mishra , Dean Student Welfare helped the team immensely for gaining various approvals and academic permissions as a result of which the team is able to takeover the unused space of Canteen-2 near the Sports Ground , which they will be able to use as their workspace. Dr Sanjay Agrawal , vice-president of Idea and Innovation Club has been instrumental in technical suggestions regarding the project. Dr. P. K Kar , Dean F&P and HOD of chemical department is guiding the team in the field of chemical usage for propellent. Various professors from the university have motivated the team with their handful suggestions and blessings. Professor Bandhan Bhoi and Puniyapriya Mishra were always a constant supporter as a mentor for the team.

The backbone of the Satellite team’s success lies in the hands of its alumni. The team’s hard work and innovation has gained immense attention and appreciation from university’s alumni , spread across the globe. Dr. Bijan Das , Former Deputy Director , VSSC , ISRO – helped the team in gaining insights about various space technology used and also helped them in connections with various renowned researchers working in the field of space science as well constant inputs have been provided by Dr Radhakant Padhy , professor of IISC Bengaluru .Ensuring that the team does not face hindrance in research and development , they were funded by the batch of 2005 Alumni , which has helped them in getting many equipments for experiments. Mr. Ashesh Padhy , Vice President of Alumni Association has also been a constant source of motivation , by giving them direction. Members from WASBE(Western Alumunus Society Of Burla Engineers) have constantly encouraged the team for indulging into such practical engineering project and wishes them good fortune.

ALSO READ: Jharsuguda Airport to be operational from October this year 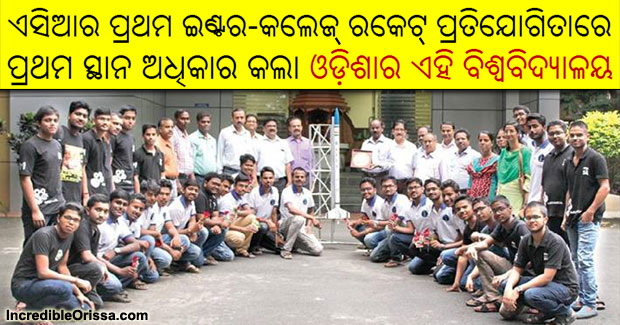