According to reports, the dawn-to-dusk bandh bandh is being observed in various districts of western Odisha, including Boudh, Sundargarh, Balangir, Bargarh, Jharsugada, Sambalpur, Deogarah, Sonepur, Kalahandi and Nuapada.

“In 1936 and 1948, the political exponents of Odisha got our land merged with the state through a conspiracy. We are demanding a separate state as per the provisions of Article 2 and 3 of the Constitution,” Koshalbadi leader of Balangir, Pramod Kumar Mishra said in a statement.

Formation of a separate state is the only solution to the problems like regional imbalance, discrimination in education, employment, industrialisation and development, he added.

On Saturday, activists of Koshal movement took out a motorbike rally at Bargarh from Samalei Temple in the city through Bheden and Chiplima before culminating at the Maa Samalei Temple in Sambalpur to sensitize people for separate state. 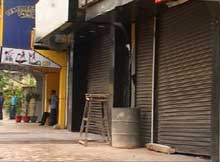 Supporters of the bandh picketed in railway station, bus stand and other traffic points hampering the vehicular movement.