There was a marginal rise in the estuarine crocodile population in Bhitarkanika National Park this year. Wildlife enumerators spotted 10 rare white crocodiles in the brackish water bodies along the park’s wetlands.

Bhitarkanika has again established itself as the country’s only habitation corridor for albino estuarine crocodiles, say findings of the latest headcount of the reptiles.

“The albino species had been sighted in the past years as well. However, we are apprehensive of their mortality rate. Since they have been re-sighted, we find the brackish water bodies of the national park have emerged as favourable habitation corridors for the white crocodiles,” said crocodile researcher Sudhakar Kar, under whose stewardship the census operation of crocodiles was conducted from January 3 to 8.

Ten crocodiles with whitish patches on their bodies were spotted living along the creeks. The animal’s latest census figure reveals the encouraging trend of rise in the number of estuarine crocodiles.

The enumerators sighted three giant male crocodiles measuring more than 20 feet. This included a 21ft crocodile that finds a place in the Guinness World Records as the world’s largest living crocodile. This apart, 18 large crocodiles measuring between 16 and 18 feet were identified during the annual headcount operation.

PHOTO: Lord Jagannath carved out of snow in Siberia 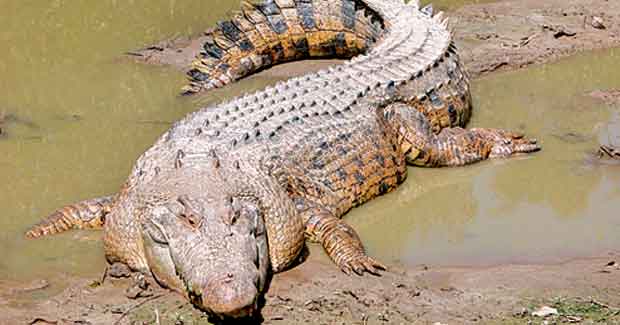