Panchubarahi temple of Satabhaya village in Odisha’s Kendrapara district, has a 300-year-old legacy of exclusively Dalit women priestesses, from the Sabar caste, who perform puja here.

Four priestesses conduct the daily rituals on a rotational basis for 15 days each. “We are descendants of Jara Sabar, who accidentally shot an arrow and took Krishna’s life,” says Janaki. A repentant Jara Sabar is said to have become an ardent devotee, worshipping a piece of Krishna’s body. “For our community, performing puja for Krishna is not new,” says Janaki, a priestess.

The priestesses’ husbands take it for granted that they have to play second fiddle to their wives in matters concerning the temple. “Our husbands can enter the temple, but cannot touch the deities. They collect fruits and flowers from devotees and hand them to us to offer to the goddesses,” says Sujata, another priestess.

While there is no historical evidence for the age of the temple, residents of the village claim the temple has not always had priestesses in charge. “Legend has it that a male Brahmin priest once saw the deities unclothed, and was cursed to become a stone. Thereafter, women were roped in to conduct daily rituals and no man could touch the idols. The tradition had been carried on since,” says Sibendra Bhanjdeo, scion of the erstwhile Rajkanika zamindari and chief trustee of the temple.

In this temple, the priestesses aren’t expected to recite hymns in fluent Sanskrit, or be familiar with complex rituals , or wear specific temple attire. “We just seek the blessings of our deities for the devotees who come here,” says Janaki.

The former kings of this zamindari had chosen four families to look after the temple and its deities. At present, there are four such assigned families in Satabhaya village, and the priestess-hood is generally bestowed upon the eldest daughters-in-law of these families in hereditary succession. The priestesses aren’t paid for their vocation, and the days they aren’t in the temple are spent working at home. 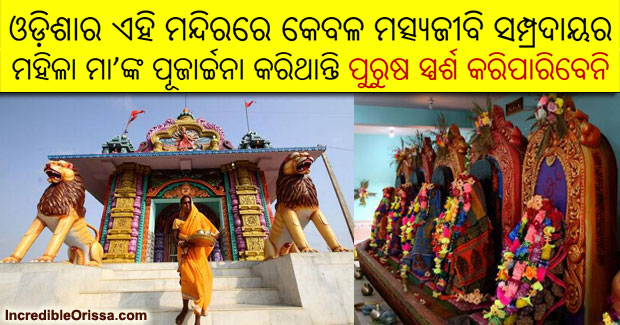