Sudarsan Pattnaik claimed to have created the world’s biggest sand Santa face with the message “World Peace” on the Puri beach of Odisha on Christmas eve.

The Santa face is 25 feet high and 50 feet wide and will be placed in the Limca Book of World Records. He has also created a sand sculpture of Jesus Christ in front of the Santa face. He has used about 600 tonnes of sand including coloured sand.

The master sand sculptor was assisted by 40 of his disciples at the Sudarsan Sand Art Institute of Puri and they took 35 hours to erect the mammoth structure.

The record-making sculpture will on display till January 1 and thousands of tourists and pilgrims who are in the temple town have been thronging the beach everyday for a glimpse of the marvellous structure. 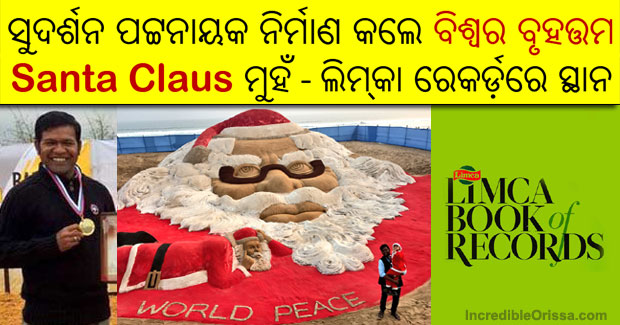