Keonjhar Rath Yatra organisers claimed that they pulled the world’s tallest Jagannath Rath ever this year and by doing so, they set a world record as their chariot – standing at a height of 72 ft – taller than the one in Puri.

The temple administration claimed that the Rath (chariot) built this year is 72 ft tall, higher than that of Puri Jagannath temple. Temple officials also claimed that even the wheels of their chariot are bigger than those of the Puri chariots.

Legend has it that erstwhile Keonjhar king Laxminarayan Bhanj had a dream in which he became aware of the location of an idol of Sri Baldev Jew. He then proceeded to the banks of the Baitarani in 1961 where he found an idol of the Lord, and enshrined it on a huge rock.

Years later, a temple was built near a fortress of the king at Puruna Bazaar in Keonjhar where the idol was enshrined as Baldev Jew after being brought from the hilly area.

Since then, Rath Yatra is being celebrated in the area. The festival here bears special significance for tribals as the festival has several elements of tribal culture associated with it. 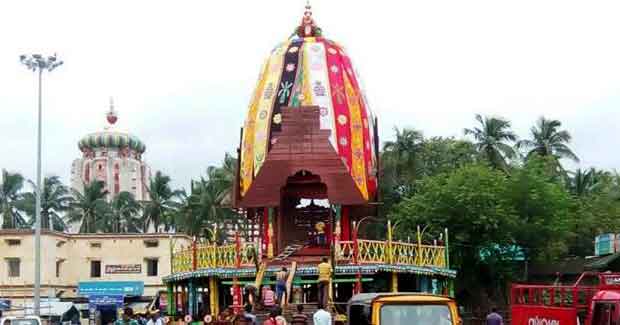