The nuclear-capable Prithvi-II surface-to-surface missile was test-fired from the Integrated Test Range (ITR) at Chandipur-on-sea in Odisha’s Balasore district this morning.

The indigenously-developed ballistic missile with a maximum range of 350 km was fired at 9:44 AM.

Prithvi is India’s first indigenously-built ballistic missile. It is one of the five missiles being developed under the country’s Integrated Guided Missile Development Programme.

The battlefield missile, with flight duration of 483 seconds and a peak altitude of 43.5 km, can carry a 500-kg warhead. 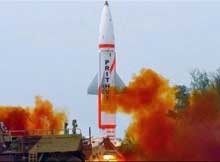 The missile has features to deceive anti-ballistic missiles and uses an advanced inertial guidance system with manoeuvring capabilities and reaches its target within a few metres of accuracy.

It has a higher lethal effect compared to equivalent missiles in the world. Scientists say the accuracy has already been demonstrated in the past in the development flight trials.