A 28-year-old woman, whom her husband and his friends had allegedly gang-raped, yesterday filed a complaint with Bhubaneswar Mahila police after escaping from the accused.

In her complaint lodged with the police, the woman has also alleged that her husband, along with his aides, was trying to send her to Jhansi.

The woman escaped last night after being sexually assaulted by her husband Saroj Kumar Pradhan, 34, a homeopathic practitioner, and his friends at a house in Saheed Nagar area in Bhubaneswar. Pradhan had abducted her with the help of his friends on January 27.

“My husband and his friends raped me in Brahmagiri and later brought me to Bhubaneswar. I did not know that I had been brought to Bhubaneswar until I managed to escape from their clutches. They tonsured me and tried to send me to Jhansi,” said the victim.

The police said both Pradhan and the woman, who belonged to the same village, had applied for a registered marriage in April last year in Puri, but Pradhan did not turn up at the time of registration in May. However, knowing about their affair, villagers had forced the Pradhans to accept her as their daughter-in-law, and she began staying with them. 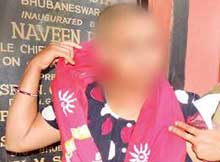 The woman alleged that her husband and two of his friends had kidnapped her from the village on January 27 and kept her confined in a dark room in Bhubaneswar. The woman alleged that the accused had raped her by mixing psychotropic drugs in her food and also deployed two persons to keep a watch on her.

“We have registered a case under several sections, including gang-rape and kidnapping, and started a probe into the complaint,” said inspector in charge of Mahila police station Bijayinee Malla.