Ambika Khudi (Snigdha Mohanty) asked Arabinda and Debu Bramha about their friendship, first entry in acting and other personal questions.

Both have done excellent comedy together in Baje Bainsi Nache Ghungura and Mamata Mage Mula (Hati and Kanki). 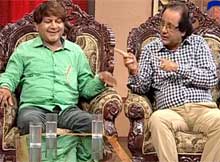 Two dishes prepared in this episode by Haladhara are – Mula Paratha and Bhendi Piaja.