A fast track court in Odisha awarded life imprisonment to five accused involved in a gangrape case. The sixth accused, a juvenile, was sent to a correction home.

The court delivered the verdict within a record 30 days. The court also slapped a fine of Rs 50,000 each on the accused. The girl was gang raped by six persons including a minor on May 2.

According to sources, one of the convict Afzal called the girl on pretext of talking and then raped her when she refused to get intimate with him at her school and fled the spot. Without returning to home, fearing embarrassment, the girl went to the Sasan chhak where she met two others who assured to help but later raped her at Kanthina bypass. Later three others also raped her one after other after taking her to Sasan canal.

Unable to bear the trauma, the girl later committed suicide by hanging herself when her family members were away at work. The Sambalpur police after completing the probe had filed charge sheet within 15 days.

This is the fastest judgement in a rape case in Odisha. Last month, a Supreme Court bench headed by Chief Justice Dipak Misra had asked all the high courts of the country to ensure fast-tracking of trials of all cases of sexual assault of children.

The locals and intellectuals said the quick verdict delivered within 30 days would boost public faith in the judicial system of the country. On the other hand, defence counsel Pritiranjan Patnaik alleged the verdict was ‘one-sided’ and they would move the higher court. 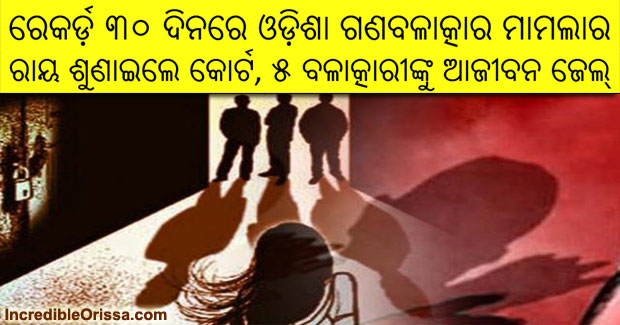