In a first in Odisha, a youth who had lost both his hands in an attack by miscreants, has been fitted with computerized hand prosthesis imported from USA at a cost of Rs 6 lakhs in Acharya Harihar Regional Cancer Research Centre in Cuttack on Wednesday.

Eight months after a gang of miscreants in Bolangir district in a barbaric act chopped off Khirod Mishra’s both hands, he is able to again use both his hands.

He has been given a new life with two computerized prosthesis brought from USA costing Rs 6 lakhs donated from CM relief fund.

“This is a milestone in the progress of medical facilities in Odisha. The medical staff as well as the students here were able to learn the process about which we had only read in books so far,” said Dr Arun Chaudhary, HoD, plastic surgery department of SCB.

The prostheses work through a myoelectric-controlled system, with a 24 hour, rechargeable battery. With these hands, the patient can write, sign, and eat easily, the doctor said. 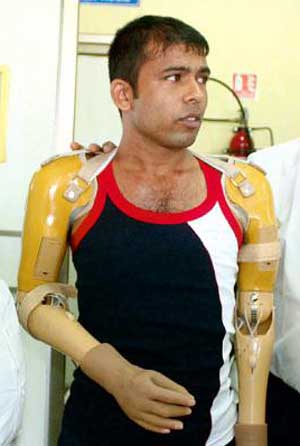 Khirod has been trained to use the artificial hands for the last two months, as the prosthesis works with signals from the brain, the doctor added.