Aircel launched its 4G services in Odisha with three other circles Andhra Pradesh, Assam and Bihar on yesterday.

Aircel had, until now, been offering 2G and 3G services in Odisha. Following the launch, Aircel will be the second operator after Airtel, to offer services under all the three existing technologies – 2G, 3G and 4G LTE.

The mobile operator says it has successfully tested speeds up to 54Mbps during its 4G service trials. ​It will offer 4G services through indoor and outdoor CPE with built-in Wi-Fi Router and high gain antenna systems.

While 4G services offer download speeds that are 10 times faster than 3G, most companies have delayed their rollouts in this segment, even after holding bandwidth for over four years, due to the lack of mobile devices that support TDD-LTE technology and low customer awareness. Bharti Airtel’s 4G services in some cities – mostly through dongles – have not met with much success. 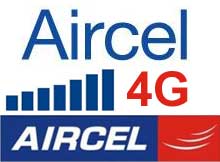