It has been a near clean sweep for the Neveen Patnaik-led Biju Janata Dal (BJD) in the twin polls in Odisha.

The BJD, which won for the fourth consecutive terms, today congratulated Narendra Modi for his party’s nation-wide success and hoped that the new dispensation at the Centre would extend its support to Odisha, so that the state could be on par with the advanced ones.

The BJD’s juggernaut has ruthlessly decimated the Opposition in the state. Even it has been able to check the NaMo wave to a great extent – which swept the entire country. The outcome of the election results surprised the psephologists and the BJD itself.

Naveen attributed the party’s success to the developments undertaken by his government. “People have again reposed their faith on the BJD, which is committed for the overall development of the state and protect the Odia pride,” he said, adding that his government would continue its “good works”.

The Congress, the main Opposition party in the state, on the other hand, accepted the mandate. Party’s poll campaign committee chairman Srikant Jena said: “We accept the verdict of the people with all humility.” Pradesh Congress Committee president Jaydev Jena owned moral responsibility for the party’s poor performance.

The BJP, which was expected to do well this time has had to remain satisfied with just one Lok Sabha seat and 10 Assembly seats. The lone BJP winner in the parliamentary polls is former Union minister Jual Oram from Sundargarh. 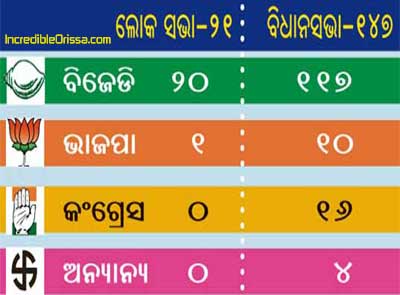 The party had won 6 seats in the Assembly and scored a duck in the parliamentary polls in 2009.

Independents have won 4 Assembly seats and of them, two are known to have been BJD rebels.