Sudarsan Pattnaik, the world’s popular sand artist, salutes the hero of the country, IAF pilot Abhinandan Varthaman and has created a beautiful sand art for him.

Wing Commander Abhinandan Varthaman, who shot down a Pakistan F-16 fighter jet across the Line of Control before he was captured on Thursday, will be released tomorrow as a “gesture of peace”, Pakistan Prime Minister Imran Khan announced today.

On Wednesday, the 34-year-old Wing Commander piloted a MiG-21 Bison aircraft along with seven other Indian jets to intercept a pack of 24 Pakistani aircraft that were targeting Indian military installations.

Abhinandan Varthaman was in hot pursuit of a Pakistani F-16 jet, which he shot down with an R-73 air-to-air missile, across the Line of Control. During the aerial combat, his aircraft too was hit by an AMRAAM (Advanced Medium-Range Air-to-Air Missile) missile that was fired by another F-16, and the Wing Commander was forced to eject and landed into Pakistan Occupied Kashmir, where he was captured. 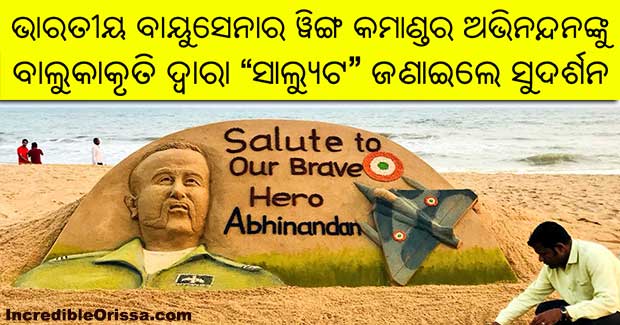