She was interviewed by Pinky Pradhan, host of the show. Namita Agrawal cooked Chhole Tikki Chaat dish for viewers.

She shared some unknown facts about husbad Sitaram Agrawal, her family, sons and in-laws.

Namita Agrawal also sang a song which is written and composed by her, but not released till now. Watch full episode video here. 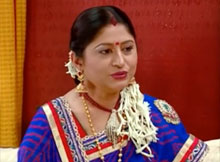 Namita Agrawal also said that she is crazy about stars. She has visited Parshuram film shooting set once, to meet superstar Siddhanta Mohapatra. And Siddhant asked him to sing an item song in near future.

Improve your male potency and fight back the premature ejaculation. With the help of tadalis-reviews.com you will have your healthy sexual life back in no time. Order it with Priligy online and forget about premature ejaculation once and for all.
Copyright © 2021 Incredible Orissa.
error: Content is protected !!
<!-- Cached page generated by WP-