Police arrested both on charge of culpable homicide, after interrogating them in connection with the death of Ritesh Choudhary (20), who was found dead in front of his landlady’s house in GGP Colony on October 16.

Initially, the police had registered a case of unnatural death in the matter, but later converted it to a case of culpable homicide after getting some clues. Watch the below video from Focus Odisha for more details. 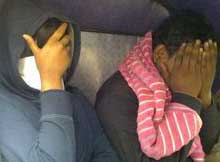 Charges under section 304 (Culpable Homicide) have been slapped against the accused and they were fowarded to a local court today.