Akhire Akhire is a 2014 Oriya film directed by Susant Mani. The film was produced by Sitaram Agrawal under Sarthak Films banner.

The film features Babushan and Jhilik in the lead, with Siddhanta in a pivotal role. 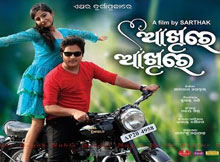 Cinematography for the film was handled by Sitansu Mohapatra and the music was composed by Malay Mishra.