The 31st edition of Bhubaneswar Book Fair started from 10 February 2015 in the City Exhibition Ground. Former Assam Governor and eminent litterateur Janaki Ballabh Patnaik inaugurated the book fair which will continue till February 22. Eminent writer Ramakanta Rath invited as the special guest at the inaugural function.

Around 300 kiosks displaying a wide range of books have been set up at the fair touted as the oldest book fair in the city. Publication houses from across the country, including cities such as Bangalore, Calcutta, Delhi, Mumbai and Hyderabad, have also set up kiosks at the fair.

This year, the organisers have named the main stage of the Bhubaneswar Book Fair after Pranabandhu Kar to mark the birth centenary year of the acclaimed writer. Similarly, two main arches of the fair will be named after noted poet Brajanath Rath and famous actor, director and producer Sarat Pujari.

An expansive variety of novels, children’s literature, short stories, classics and bestsellers are found on the shelves. Books on engineering, medicine, astrology, ayurveda and architecture catering to the needs of people of various age groups are also on sale.

Some kiosks are exclusively displaying Odia books. A number of local publishers and booksellers have taken prominent locations at the fair. Some of the publication houses from the state that have set up their kiosks are Vidyapuri, Friends Publishers, Odisha Book Store, Cuttack Book Store and A.K. Mishra Agencies. 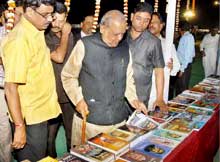 The Sachchi Routray Kavita Samman for the year presented to Dr Pratibha Satpathy, while senior IPS officer and writer Debashis Panigrahy has been chosen for the Bijay Krushna Mohanty Galpa Samman.

Last year, a business of around Rs 3 crore was garnered from the fair.