You can’t miss this rare video of music director Radhakrushna Bhanja singing his own composed song ‘Chandrama Ago Chandrama’ on stage with Akshaya Mohanty and Prafulla Kar.

Radhakrushna Bhanja was a popular music composer of Odia music. He had battled cancer. Akshaya Mohanty and Prafulla Kar had gone to Baripada for a melody programme. They met him at his residence and requested to join them on stage.

ALSO WATCH: Rare interview of Akshaya Mohanty as a novel and story writer

He agreed to sing his favourite song ‘Chandrama Ago Chandrama’ for the audience. In this video, you’ll feel how he is singing the song with pure emotions. He is really pride of Odisha and Mayurbhanj.

Chandrama Ago Chandrama is a classic song from Odia film ‘Sagar Ganga’, which is sung by Abhijeet Bhattacharya & Sadhana Sargam, written by Nimai Mohanty and composed by late Radhakrushna Bhanja. Rachana Banerjee and Anoop Misra acted in this film.

You can’t find such bondings among music directors now-a-days. Odia music industry survived on those classic compositions of that era. After seeing this video, we’ll definitely wish those days to come back again. 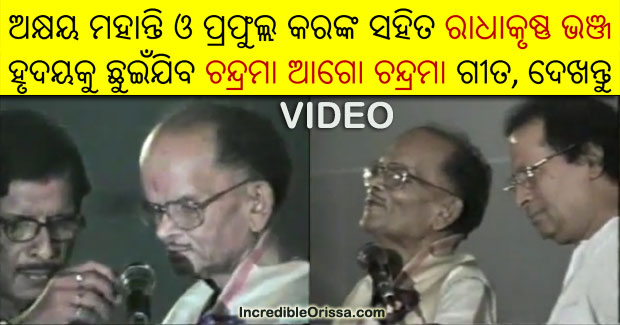