The Centre on Tuesday appointed former Odisha minister Draupadi Murmu as the new governor of Jharkhand in place of Dr Syed Ahmed.

Murmu, a two-time minister in the BJP-BJD alliance government in Odisha from 2000 to 2004, who is from Mayurbhanj district, described her appointment as a proof of the Narendra Modi government’s commitment towards the cause of tribals.

“It is not a post, it is a responsibility. I was told I am the first tribal woman to get a gubernatorial assignment, that too of a tribal dominated state. I will perform my duties with utmost dedication. I thank Centre for giving me an opportunity to serve people,” said Draupadi Murmu, who became the first woman leader from Odisha to be appointed as Governor.

Murmu, a native of Baidaposi village under Rairangpur police station in Mayurbhanj district, is a well-known tribal leader. The 57-year-old represented Rairangpur assembly segment in the Vidhan Sabha twice, from 2000-2004 and 2004-2009. She was also vice-chairman of Rairangpur Notified Area Council. 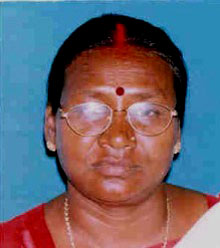 Draupadi Murmu is associated with several socio educational and cultural associations of Rairangpur. She lists her hobby as reading and knitting in the Odisha assembly website.

Dr Syed Ahmed has been transferred and appointed as Governor of Manipur for the remainder of his term.