He was admitted to the premier referral hospital after a cardiac arrest. He breathed his last this morning on 4.25 AM at the age of 95. His body was brought to his Nandi Sahi residence in Cuttack where relatives, friends, close acquaintances and people from Odia film industry paid their last respects.

Born in 1920 at Raghunathpur of Jagatsinghpur, Ghosh started his career as a theatre artist at the age of six. Later, he entered the cine industry and made a mark for himself.

Gopal Ghosh has directed over 50 feature films at the State and national level.

Gopal Ghosh, the veteran filmmaker not only introduced new actors and actresses but several technical personalities to the film industry. He was known for his gentle nature and the despite earning fame, he was down to earth. 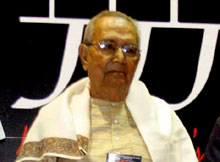 The movie fraternity, politicians and film lovers expressed their grief over the demise of the veteran personality.

May his soul rest in peace.