India Surf Festival (ISF) 2015 will begin from February 6 at Ramchandi beach on the Puri-Konark Marine Drive in Odisha.

The festival will showcase to a worldwide audience its massive potential for board sport activities such as surfing, kite- surfing, stand up paddling (SUP) and long boarding (skate).

“The mission is to make the people realise the importance of water sports, apart from making it an open festival not only limited for the sports enthusiasts,” said ISF founder Sanjay Samantaray.

Making ‘Girl Power’ its central theme, the fourth edition of the festival is not only ready to unleash the power, skills and capabilities of women surfers from across the globe but also undertake a mission to empower the women in the community.

Another highlight of the festival includes the kite surfing performances by around 10 international kite surfers. The surfers will display stunts in the air, including twin tip, surfboard, race board, free style and wave style, and the one displaying the maximum number of stunts would be rewarded.

The Kitesurfing Lanka, a group of kite surfers from Sri Lanka, will also be demonstrating the sport to visitors.

The uniqueness of the festival would be the design and installation of ISF, which is made from natural materials and involves manpower from surrounding villages. Materials like bamboo, jute, cloth, coconut ropes and wood will be widely used in building the festival. 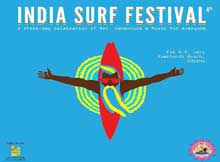 India Surf Festival 2015 is also poised to be included in the Asian Surfing Championship (ASC) tour, a move that would not only catapult Ramchandi beach and the long Odisha coastline into the global surfing map but also project the State among the best destinations for world surf tourism.