Three young Odias have been selected in different categories at the 61st National Film Awards announced on April 16, in New Delhi.

Mumbai-based journalist Alaka Sahani from Odisha has won the Swarna Kamal as the ‘best film critic’ at the 61st National Film Awards 2014 for a series of out-of-the-box articles that go beyond glamour, glitz and gossip. The award carries the Golden Lotus trophy, cash award of Rs 75,000 and a citation.

Film maker Lipika Singh Darai has won the Rajat Kamal (Silver Lotus) for the ‘best voice over’ in the non-fiction category for her documentary, ‘Kanki O Saapa’ which captures her candid conversation with her grand mother. This 16-minute film has been scripted, directed, audiographed and edited by hers. 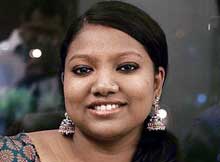