A team of five students from Odisha’s Veer Surendra Sai Institute of Technology (VSSUT) in Burla (Sambalpur) won the grand final of Anveshan 2018, which was held in Bangalore on August 6.

The team from Idea and Innovation Cell of VSSUT won a cash prize of Rs 2.5 lakh for their project titled “Anecure – A non-invasive Haemoglobin Measurement Device”.

The competition was an opportunity for technology students across the country to come up with innovative products for the welfare of the society. The event, organised by Analog Devices, was flagged off in October 2017. The competition lasted for about 10 months and had four rounds.

The VSSUT team devised a non-invasive haemoglobin measurement device, which can alleviate the challenges faced in the traditional method of blood test conducted by pricking finger. The project developed by VSSUT students uses low-cost non-invasive method to measure the haemoglobin count, by the multi-spectral technology.

The device has an integrated android app, which is user-friendly and reliable. It uses a cloud storage to keep user’s data and maintain its security. The team comprised Bodhisattwa Sanghapriya, Om prakash, Apurwa Masook, Jaswasi Sahu and Rounak Agrawalla.

They are working on the extension of project in collaboration with department of biotechnology and National innovation foundation, New Delhi, department of science and technology to launch the project for rural health care. The field test has been performed on the product with the help of ASHA workers and feedback was taken into account for attaining accuracy and calibration of the device. 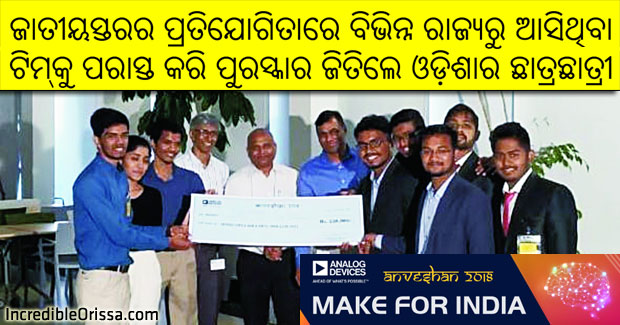