The Odisha government will provide incentives to best-performing students in the matric examination. The initiative is aimed at creating awareness among the students about the importance of Odia language and also garner interest among them.

Ten students from the block level, 10 from the five municipal corporations, five from the 46 municipalities and two from every NAC will receive Rs 5,000 each. Around Rs. 1.57 crore has been sanctioned for the scheme.

Also, students and teachers of schools of three blocks, two Schools from five municipal corporations and one school each from 46 municipalities and all the NACs, who have fared well in the matric examination, will receive one lakh.

The parents of the students will also be felicitated. A budget of around Rs 15 crore has been sanctioned for the year 2018-19, including projects to improve the quality of education.

“Odisha is one of the leading states in implementation of Right of Children to Free and Compulsory Education Rules, 2010,” said education minister Badri Narayan Patra. “Attention is on ensuring 100 per cent enrolment of children in the age group of 6 to 14.”

A provision of Rs 50 crore under the Mo School campaign has been done to promote and facilitate volunteerism among people in general and old students, in particular, to give back to their alma maters.

Also, the government will provide twice the funds received as donation from individuals for setting up a science lab or library, provide scholarships and promotion of sports in schools. 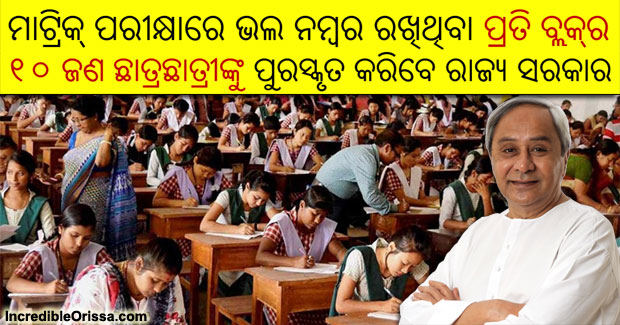