“One small step for her, a large one for the community. Meet Meghna Sahoo, our first transgender driver partner,” Ola wrote in its official Twitter handle.

One small step for her, a large one for the community. Meet Meghna Sahoo, our first transgender driver partner.
Know more – https://t.co/82m1AnA6Pz pic.twitter.com/vDDK0AFPJm

WATCH: Finally a film on ‘Devdas’ in Odia language

Meghna said due to the help of some people and local RTO, she has managed to get a commercial driving license, which otherwise is a very difficult process. She has got a Maruti Swift Dzire last month and since then she has been working with Ola.

Meghna, who has also been working as a transgender rights activist, became the first transgender in the state to have got married to a man last year. She was also in the news in May last year when she announced to contest Rajya Sabha elections from the State after BJD leader Bishnu Charan Das resigned from the Upper House.

The transgender community hailed Meghna Sahoo for her bold move. Social activist and All Odisha Kinnar Society President Pratap Sahu, said Meghna once again set another example for all who often take her lightly. 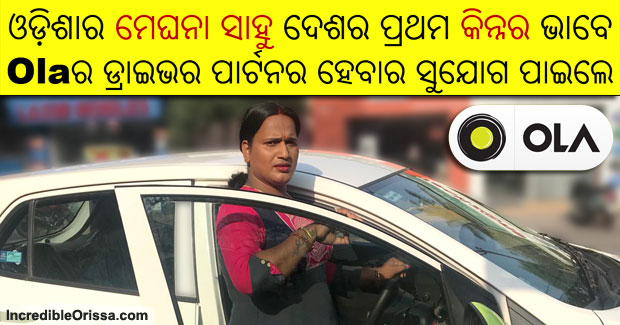