A five-year-old Muslim girl surprised everyone by securing the first position in Bhagavad Gita recital competition in Odisha.

Firdaus, a Class I student of Sovaniya Sikhyashram in Kendrapara, had participated in the Bhagavad Gita chanting competition organised by Pragna mission on Wednesday. She stood first from among the 56 children in the sub-junior category.

Showing exemplary courage, Arifa Bibi, mother of Firdaus, stood by her daughter throughout the competition held at a temple premises in Kendrapara.

“When we came across news of the participation of a Muslim girl in the recital of the Srimad Bhagavad Gita, considered a taboo in the minority community, we took precautions keeping in mind the sensitive nature of the issue. We sought the consent of her parents. To our utter surprise, Firdaus’ mother not only gave her consent, but also remained present all through the competition,” said Akshaya Pani, one of three judges.

Firdaus was miles ahead of her competitors. At one go, she recited the Gita with consummate ease without stopping. Her pronunciation was immaculate. Judges awarded her 90 marks out of a total of 100.

“My teachers have taught me moral education and have inculcated me the spirit of ‘Live and let others live’. I believe that all human beings are members of an extended global family. This is what my dear teachers tell us in the classrooms”, the girl said.

“I am a proud mother. It is giving me immense satisfaction after knowing that my daughter has stood first on reciting Hindu religious scripture Gita. Credit for my daughter’s success goes to the school teachers,” her mother Arifa Biwi said. 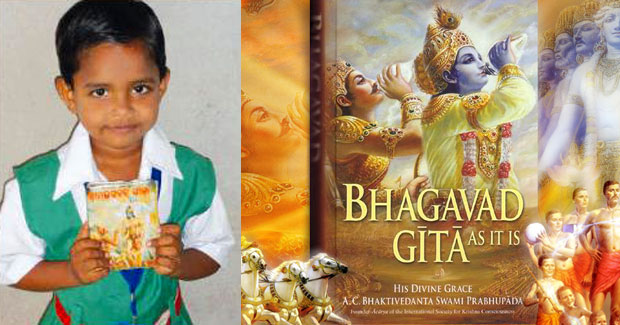