All Odisha Traders’ Associations (AOTA) has announced that it would go ahead with its proposed strike from Thursday after its talks with the state government over exemption of value added tax (VAT) on pulses, wheat and wheat products failed.

The traders’ association, which had threatened to stop import and sale of these items from April 9, has already stopped generating waybills, a prerequisite for import of goods from outside the state, since Sunday.

Notably, the traders are opposing the 5 percent VAT collected on these food items. The Lion’s share of the tax collected from the sale of these commodities is being siphoned off, the Association claimed.

“As many as 24 states have not levied VAT on these essential commodities whereas Odisha government has. Almost 90 percent of the pulses, wheat and wheat products are imported from other states and imposition of tax lead to higher prices of these commodities. We are consumers too. So in the interest of the consumers we have decided to launch an indefinite strike,” General Secretary of AOTA, Sudhakar Panda said.

In December last year, the traders had gone on a two-day strike stopping import and sale of pulse, wheat and wheat products demanding waiver of the levy. 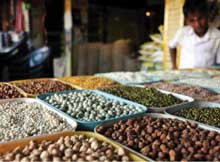 However, the stir was called off after a written assurance from the office of the Commissioner, commercial taxes, to look into their demands. The government had assured them to look into the issues and urged them to call off the agitation for three months.

With the government failing to meet its assurance, the traders have again called for an indefinite strike from Thursday.