Dance and music have no language barriers. You have seen many dance covers made on Ed Sheeran’s ‘Shape of You’. Now a group of Odissi dancers in Odisha made a cover video on it.

Detour Odisha made this cover video to express the beautiful art of Odissi dance to one of the most popular songs of 2017 by Ed Sheeran. The video is shot at different heritage sites in Bhubaneswar: Dhauli Shanti Stupa, Sisupalgarh and Brahmeswara Temple.

“Shape of You” is a song by English singer-songwriter Ed Sheeran. The song reached number one in more than 30 countries, and has received various certifications. On the digital songs chart, which measures online singles sales, Sheeran’s “Shape of You” sold another 115,000 units for the week, nine weeks after its release.

On 30 January 2017, the song’s official music video, starring American dancer and model Jennie Pegouskie and retired professional sumo wrestler Yamamotoyama Ryūta (credited as “Yama”), was released on Sheeran’s channel. It was shot on location in Seattle, and was directed by Jason Koenig. As of 19 March 2017, the video has amassed over 420 million views. 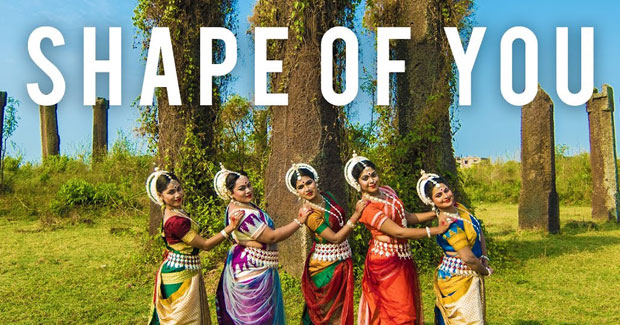