Sarathi Baba duplicates are hit among people during Durga puja bhashani in Bhubaneswar, Cuttack and other parts of Odisha. 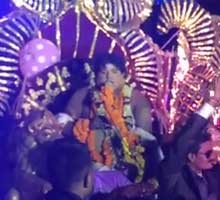